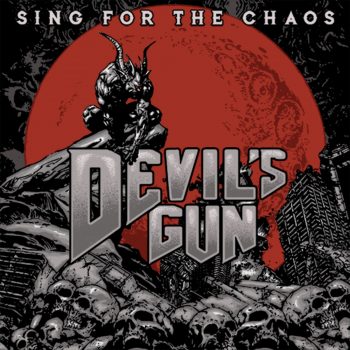 If I’m being totally honest, there isn’t a ton of “wow factor” albums I’ve listened to so far in 2019. In fact, I’ve personally been quite disappointed with a lot of the outputs. But I found a pleasant surprise recently and now another one here with Devil’s Gun! On April 12, 2019, Devil’s Gun – Sing for the Chaos will hit the shelves (er…online screens). And I love it!

DEVIL’S GUN – Sing for the Chaos

Not knowing a thing about the band nor what to expect I cued up the promo MP3. Greeting my ears straight off is the sound of a muscle car approaching. The muted thump of the stereo its companion. Then the audio fully explodes leaving the engine’s rumble behind. Thus begins “Killer Machine” and my intro to Devil’s Gun. My head’s nodding along already to the chugging riff before we’ve even hit 30 seconds in. And then Udo Dirkschneider‘s vocals joined into the track! No, seriously it’s not Udo fronting the band but if I hadn’t gone straight to the video to prove it to my own eyes I wouldn’t have believed! The vocals of Joakim Hermansson could easily doppelgänger for Dirkschneider though.

Every song had me either up out of my chair, or air drumming like a mad bastard (which at my age can really cause a shortness of breath!). Or even just head banging along. These are true old school heavy metal pounders. Consequently, even though each composition warms my heart, my clear fave is “Alligator FuckHouse” and not just on name alone! It just exudes a different aura and flavour than the rest, providing that little extra “spice of life” into the mix.

The whole album is loaded with 80’s influenced hard rock thundering anthems. I don’t think I can say I any better than the press release I’ve copied in below:

Hot off the presses, Sing For The Chaos, Devil’s Gun‘s new album will showcase the world what heavy metal is all about. This is the real deal. No frills. No punches held. No ballads. No bullshit. Just pure heavy metal. 10 tracks that will make your head spin, your adrenaline rush and work those neck muscles like never before. From speed to boogie with melodies, sharp riffs and choruses that will set ears ablaze around the globe. The metal gods are pleased!

This is seriously my number one album of the year so far!

Hey kids, Rich “The Meister” Dillon here with this little blog review regarding Cobra Spell and their performance during the Warm-Up Party for Headbangers Open Air 2022. I must say overall that there were a few bands at Headbangers Open Air that I would see for the first time here. These bands were highly anticipated. […]