GIRISH And The CHRONICLES – Rock The Highway (Album Review) 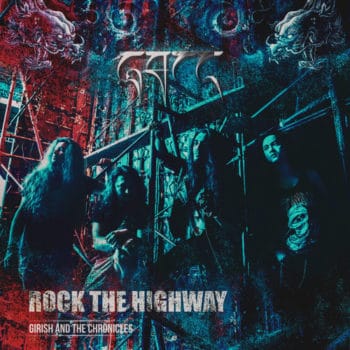 GIRISH And The CHRONICLES – Rock The Highway

Heavy Metal is slowly but surely taking over the world. The latest nook this beloved music genre reared its head is, India. Traditionally, not a place one would expect to see the roots of this style flourish but here it is, nonetheless. Now, for the second time with a purpose. I said second time because Rock The Highway is a follow up to Girish And The Chronicles (from here on abbreviated as GATC) first album, Back On Earth released in 2014.

Judging the Highway by its surface

The image from the oversaturated red and green cover does a great job of putting faces on the music we are about to hear. And if I wasn’t familiar with GATC from before, I would have no confusion in which direction this band is headed. One-way to L.A. of course.

These guys do not travel light, and this is definitely not a Sunday cruise type of delegation. “Rock The Highway” is a monster opener with an exploding guitar solo on steroids, and an overall ‘80s personality, followed by an infectious tune “Every Night, Like Tonight”. If you already feel exhausted from excitement, then brace yourself for a potential hit and the first song to be treated with a visual presentation from the album, “Rock ‘N’ Roll Is Here To Stay”. The line “It’s not like I wanna be a star, I just want some more of Rock ‘n’ Roll” resonates humbly with its honesty. Love that subtle bass run just before the guitar solo as well.

“The Sikkimese Dream” experiments with sound and rhythm to add texture to the overall experience. “Bad Shepherd” is another song to burst through the speakers with screaming guitar licks. Midway through, it shifts the gear down, and soon after accelerates again, avoiding few potholes in the process. The multi-layered vocal part in the chorus is a masterpiece on its own. “She’s Heavy Metal” hits you hard and drags you along for a ride with chains wrapped around your ankle, and a power only equal to a 10,000 pounds heavy Monster Truck. Although you might be bruised and spinning out of control, Girish Pradhan has full command of his vocal deliveries, running side-by-side with a furious pace set forth by the band. In this, dead-even race, Suraz Karki has no other choice but to overdub Girish’s shouting in an attempt to secure a spotlight for himself in the hall of greatest guitar solos ever, while giving the band a much needed moment of silence to recuperate and continue this breakneck race with Girish to the end. Sounds exciting? Well, it is. If you thought now would be a good time for a ballad… or two, sorry to break it to you, “The Rebel” continues where its predecessor left off.

If I have to sum up “Trapped Inside A Mirror” in one word, it would be: rich. It has so many changes within its passage, that three separate songs by a lesser band would not do justice to all the complexity this one extends. “Tears Of The Phoenix” is more Heavy than Hair Metal, displaying the ease GATC maneuvers between styles in order to avoid being pigeonholed. This sense of music with multiple personalities continues in the appropriately titled “Identity Crisis”. 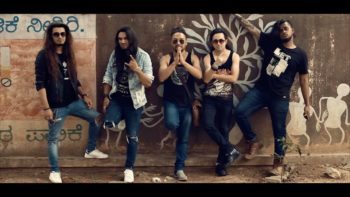 As you could gather from the above, this release has no shortage of rocking tracks. However, what would an ‘80s inspired album be without ballad(s). Here we got 3. (Like one wasn’t enough). Well, don’t hold it against me (or do if you will), by now it feels like I heard them all. So, here is the breakdown. “Walking The Line” is a bonus track and a filler at that. Sorry guys, no sympathy here. “The Distance Between” is an obligatory ballad, which neither steers nor soothes me. However, “Wounded” is a prime specimen of what Power Ballads should be. Heavy, yet melodic guitar runs throughout the song, and the two-part guitar solo is bridged with a haunting orchestration, for good measure. Bravo!

No Bollywood, No Accent, No BS

If you expected a Bollywood version of Hair Metal, then you were wrong. If you thought the only thing Heavy here is going to be Girish Pradhan‘s accent, then you couldn’t be further from the truth. (BTW, his pronunciation is spot on). And if you predicted, the spirit of the ‘80s can’t be recreated on this side of the century, then you are clearly in denial, my friend. It’s so obvious GATC found, (and stole) the book of Hair Metal secrets and followed its instructions to a tee… and then some. The production is tight and crystal clear. The song arrangements are up there, with the best ones. The energy is vibrant. The guitar solos are work of a virtuoso. And last but not least, the vocals are delivered with power and attitude.

9. Trapped Inside A Mirror

11. Tears Of The Phoenix

Identity Crisis is the second single official music video from Girish & The Chronicles – Rock The Highway CD | Released on the 27th April 2020, by Lions Prid…

WONDERLOVE- All of the Nightmares (Album Review)

Wonderlove has flown completely under my radar in their long, but sporadic career. Upon its release in February, I liked All of the Nightmares well enough. But each listen brought something new. Now, after almost five months it’s risen to among the top releases of 2022. While lumped in as a prog band, these guys […]

Having seen The Cruel Intentions twice in the past few weeks, and getting to hear the new singles live, I was very excited for the new album, Venomous Anonymous. It did not disappoint! I have enjoyed all three singles which include “Reapercussion”, “Kersosene” and “Sunrise Over Sunset”. All three have great accompanying music videos, and […]

Here at CGCM, we love to help promote new and upcoming bands.  October 18, 2021, is the day that I first heard of Kardang. Henning messaged me on Facebook asking if he could send me a song to see if I could play it on my radio show. I host the “Power Chord” here on […]