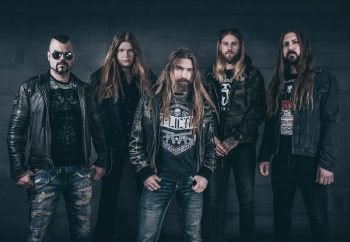 Formed in 1999, Sabaton’s first album was Fist for Fight, a compilation consisting of material from two demo tapes recorded between 1999 and 2000. After that, 2005 brought the second album, Primo Victoria, where Sabaton made their true mark and never looked back. Headlining huge festivals throughout Europe and headlining shows all over the world, this group of guys are back with their ninth studio album. Sabaton – The Great War sees a release of July 19th, 2019.

I first heard of Sabaton in 2013. Hearing they were opening for Iced Earth in Toronto in 2014, I figured I better check this band out. I watched their video “The Lion from the North”. Wow, I became an instant fan. Picking up their latest CD at that time, Carolus Rex, I soon found myself thinking I have a new favourite group. Moreover, getting their back catalogue, I realized I wasn’t as excited to see Iced Earth as it turned out, it was all about seeing Sabaton. Since that show, I have seen them five times with the highlight of 2016 as they headlined Sweden Rock Festival. Also, I was able to meet up with the band in Sweden to do an interview.

We welcome Tommy Johansson on guitars for the new release as Thobbe Englund left the group after the last album but plays a guitar solo on one song on The Great War. Original members Joakim Broden (vocals) and Par Sundstrom (bass) are back with Chris Roland (guitars) and Hannes Van Dahl on drums.

Also, if you are new to Sabaton, you need to know their music is influenced by the many wars of the world, historical battles and acts of heroism. The Great War is based on World War One. Get ready for another history lesson from this incredible metal power band from Falun, Sweden.

Time to crank up the new release. Let’s see how it stacks up with the rest of their discography. With eleven tracks, The Great War opens with “The Future of Warfare”. It is everything you would expect from this Swedish power outfit. Their sound is unique, but their style never seems to change from album to album which is one of the reasons I love this band. Therefore their music flows gracefully from each release.

Moving through the next four tracks, “Seven Pillars of Wisdom”, “82nd All the Way”, “The Attack of the Dead Men” and “Devil Dogs”. All give you the same power, heart-throbbing energy Sabaton is known for. Many similarities to past tracks in their history, but they continue to give us 110% of the music the fans crave for.

Then, moving to track six we find the second single from the new release. “The Red Baron” which has been a historical topic for many years. Manfred Von Richthofen was a fighter pilot with the German Air Force who was considered ace-of-aces. Starting off with only the keyboards the track then bursts into a frenzy, a powerful mind-blowing tune. I have always been intrigued by The Red Baron’s history, so this is a real bonus that Sabaton wrote a number about this legend.

Following up that is the newest single “Great War”. The divine songwriting talent merges with a magnificent symphonic orchestral sound while combining it with their signature power metal style. This may be the top track on the new album, or very close.

As The Great War is getting close to the end “A Ghost in the Trenches” brings us to the story of Francis Pegahmagabow, a First Nations Canadian soldier who was the most effective sniper of World War One. I can’t wait to get my physical copy of The Great War so I can read up on each of these tracks. A brilliant number that leads into the first single, “Fields of Verdun”. The story of the French victory in the Battle of Verdun. This track had given me the foresight that this may possibly be my #1 album for 2019. However, we will find out in December. A remarkable tune that has me cranking up the volume with each listen. In years to come “Fields of Verdun” will be a classic benchmark in Sabaton’s discography. We also welcome back Thobbe Englund with playing the guitar solo on this title. 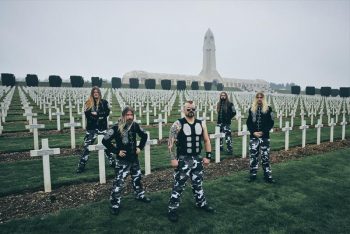 “The End of the War to End All Wars”. A fitting song to end this phenomenal arrangement of tracks by the Swedish Gods of Metal. Bringing in the choir puts a beautiful touch to this powerful ending.

Thinking the album is over, we are bestowed with the classic war poem “In Flanders Fields”. Written on May 3rd, 1915 by Lieutenant–Colonel John McCrae a Canadian physician. The choir certainly did a wonderful job singing this timeless poem.

Next up is waiting to get my Earbook of The Great War in the mail. Yes, once again I have ordered the limited special edition.

Overall The Great War is fantastic. Is this the best release?

I cannot find a flaw except never enough tracks. Listen to it and find out for yourself how it ranks in their discography. For me, I love all their albums, but Carolus Rex holds a special spot in my heart as it was the first CD I listened to. “The Lion from the North” is my all-time top song. Hearing this in concert has brought tears of joy. Now I can’t wait to hear many of the new songs live.

Don’t miss The Great War tour. They will be playing seven festivals around Europe in July & August. In October they will be heading to USA & Canada for a month of shows with special guest and fellow Swedes Hammerfall. 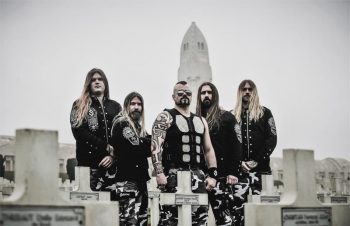 In the new year, they will take their tour back over to Europe. If you have not seen Sabaton live you will not be disappointed. With so much energy they always have a great time on stage as they entertain their fans.

Photos & logo in the article taken from Sabaton Official Website.

Full Disclosure Full Disclosure:  I’m a huge fan of Erik Grönwall from back in his H.E.A.T days.  I think he’s one of the best frontmen I have seen live.  As a matter of fact, my jaw literally (yes, literally) dropped, when I first saw him front H.E.A.T on the Monsters Of Rock Cruise.  Consequently, I […]

Little is known about this little treasure I discovered! What I know so far is that they are from Oxford, Michigan. They look like high school kids or freshly in college. I have to tell you when I played their album I was not expecting these young lads at all. I had in mind some […]

I Wanna Tell You A Story: If I may go off on a slight tangent before I start, I want to tell readers how when I was young (far too many years ago) I had a tape of the Genesis album The Lamb Lies Down On Broadway given to me. I played the shit out of […]